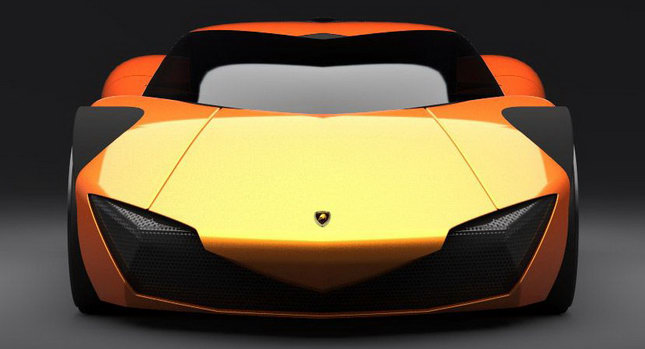 The concept would use four electric motors and split the power 30%/70% front to rear. A Li-Tec flat-cell battery out back and a KERS system in the front would be providing the power.

The press release goes on to explain the bonus of no big, bad V12 out back: "The absence of a big V12 engine in the rear creates enough room for a third passenger in a central position." That's right, seating for three.

While the driver's door would be normal, the passenger side's would be bigger to provide access to the back seat.

But the coolest design idea of all? Look no further than those triangular intakes/exhausts. "[They] serve for battery cooling and visually replace the traditional exhausts...[and] also act like the tubes of a subwoofer, channeling the sound of the electric motors, placed behind them."

Then there's the fact that owner's would theoretically be able to upload their own track ghosts to an online community.

If a real racetrack has been / is being covered, the GPS would record car placement / track time, allowing people worldwide to challenge an owner's record.

Built on the platform "Galaksija".